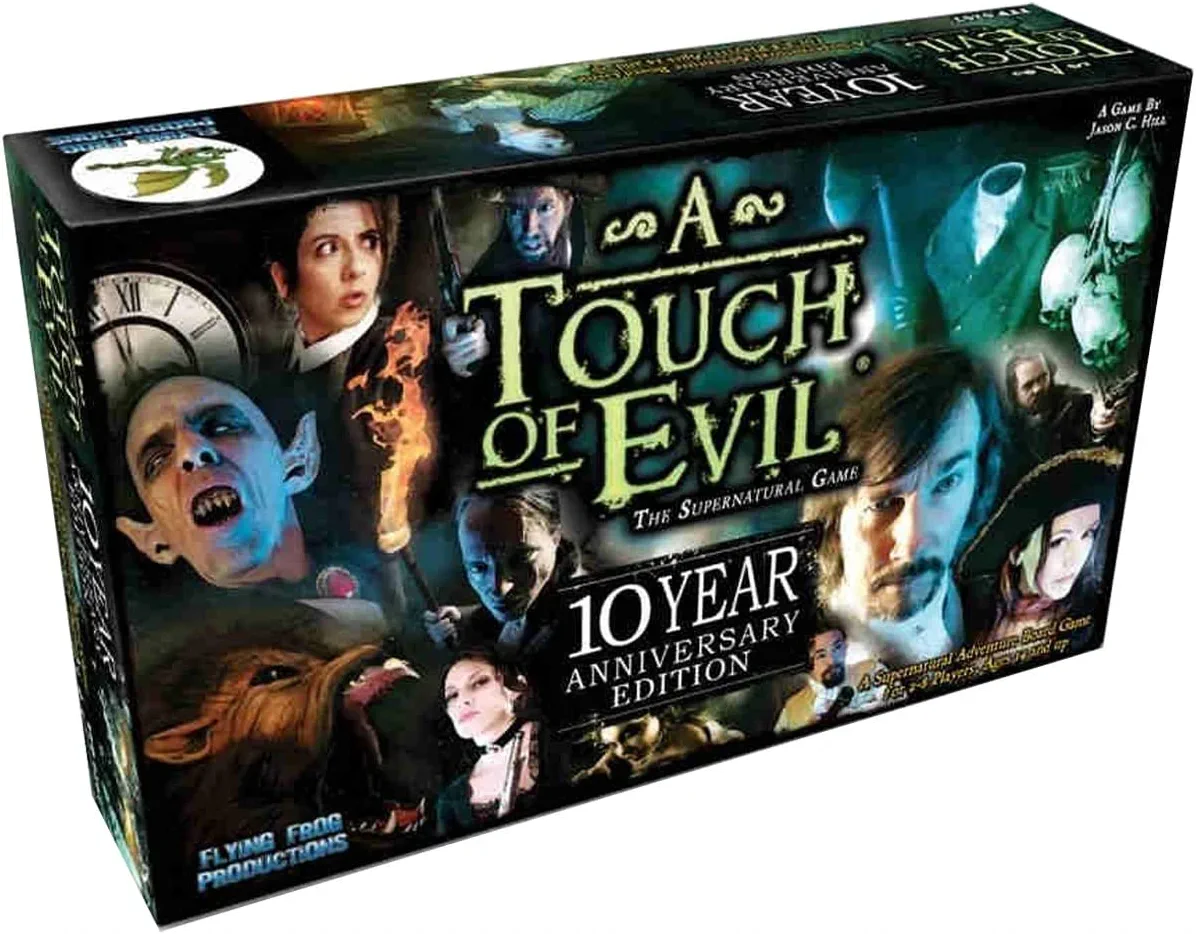 A Touch of Evil 10 Year Anniversary Edition is limited to ONLY ONE SINGLE PRODUCTION RUN, when it is gone, it is gone for good. Each copy has a laser sticker on the back, imprinted with the unique number of that box in the print run.

A Touch of Evil, The Supernatural Game is a fast-paced game of fiendish creatures, dashing Heroes, and high-adventure. Each player takes on the role of a unique monster-hunting Hero, racing against time to stop the forces of darkness from claiming another foothold in the world of man. Only by investigating the town and building your Hero’s strength can you hope to hunt down the Supernatural Villain to his Lair and defeat him in an epic Showdown. Players can race Competitively to be the first to defeat the Villain and save the town, or they can work together Cooperatively to defeat a much stronger Villain.

So grab your Wooden Stake, stuff some shot in that Musket, and hold on to your Tri-corn Hat; no one is safe from the creatures of the night and no one can be trusted...for inside everyone lies A Touch of Evil.

To celebrate the 10 Year Anniversary of A Touch of Evil, we created a Limited Deluxe Edition of the original game! This boxed set includes plastic pieces for many of the markers, plastic terrain features for Corner Locations, and in addition to the original cast of Heroes and supernatural Villains, it includes a sinister new EPIC Villain version of the Spectral Horseman, complete with a plastic Villain figure, expanded Minions, and a new deck of Horseman-themed cards to unleash upon the Heroes! Also includes all of the Web Villains from the last decade of A Touch of Evil - for the first time in print - including all of the associated die-cut counters! With a Deluxe Numbered Collector’s Box designed to hold all of your A Touch of Evil expansions, a re-mastered game soundtrack including new songs, and a brand new Rulebook, collecting ten years of gothic horror, this set will be a must have for all ATOE fans!