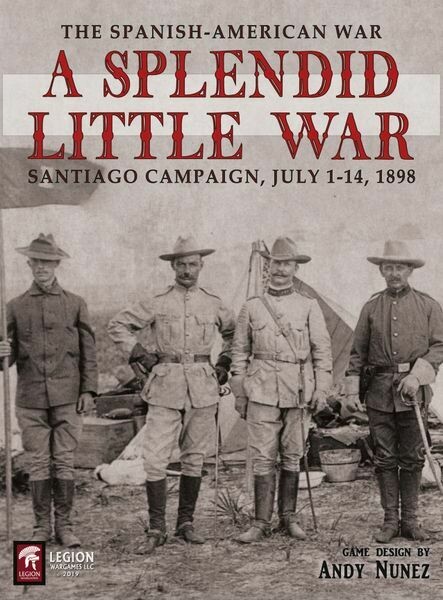 A Splendid Little War begun with the highest motives, carried on with magnificent intelligence and spirit, favored by that fortune which loves the brave." so did John Hay, U.S. ambassador to Britain describe the Spanish-American War which saw the U.S take possession of much of Spain's 400-year old empire, extending its territorial dominance overseas and joining the ranks of colonial nations.

The game covers the entire land campaign on Cuba, which saw the fall of Santiago de Cuba and the Spanish surrender of the island. It combines only moderate complexity with the delivery of a wide variety of unit types:the Rough Riders, Cuban (and Spanish) Guerrillas, Gatling Guns, the US Observation Balloon, Engineers, and just about everything in between.

The US, with more firepower and better artillery, has the upper hand but the dug in Spanish defenders, the Spanish relief column's arrival, and the ensuing Yellow fever will take its toll on the US forces and could turn a Splendid Little War into a wretched defeat.

As well as the Campaign Game which covers the entire 14 days of battle, from the initial US attack on July 1st until the Spanish surrender on July 14th, there are three shorter scenarios covering the major engagements of the campaign:

Along with general streamlining of the rules, his second edition of the game brings: