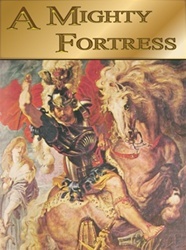 Between 1531 and 1555 the world shook to the reverberations of a struggle whose resolution was to chart the course of Europe’s religious and political alliances for centuries. It was in these years that the conflicting ideologies of Lutheran Reformation and Catholic Counter-Reformation inexorably drew the disparate empires, nations, and leaders of Europe into a maelstrom of religious war and dispute.

A Mighty Fortress simulates this major historical conflict on a beautifully illustrated political map of Europe. Colorful cardboard playing pieces move, position. And engage in battle upon this map through a superimposed hexagonal grid, which functions like a chessboard’s squares.

There are some rules and player card errata that you will want to downlowd from the publisher's website.