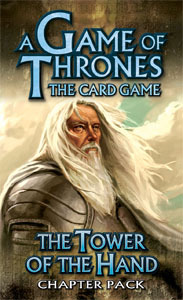 A Game of Thrones: The Tower of the Hand Chapter Pack

The Hand of the King was the second-most powerful man in the Seven Kingdoms. He spoke with the king’s voice, commanded the king’s armies, drafted the king’s laws. Robert was offering him a responsibility as large as the realm itself. It was the last thing in the world he wanted.

An A Game of Thrones: The Card Game core set is required to play. Contains cards 41-60 of the King's Landing cycle.