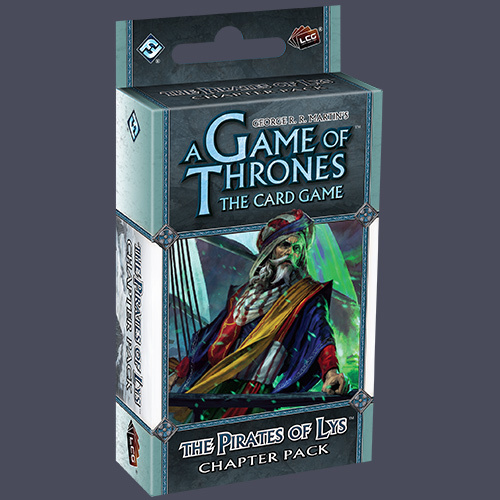 A Game of Thrones: The Pirates of Lys Chapter Pack

“Where are the pirates?” When Davos did not answer, he rapped his spoon against the table. “The Lyseni. Torrent spied their sails from Littlesister, and before him the Flints from Widow’s Watch. Orange sails, and green, and pink. Salladhor Saan. Where is he?"

The Pirates of Lys is the third Chapter Pack from the A Song of the Sea cycle. As the tides carry the Great Houses and their fleets further out to sea, The Pirates of Lys continues to give shape to each House’s naval presence with the sixty new cards (three copies each of twenty individual cards). As the Great Houses head to sea, players will find deep synergies between the Chapter Pack’s characters, events, and locations. The naval challenge enhancement continues to feature prominently, appearing on several characters and interacting with new events and locations, and several cards reward players for winning challenges by four or more total strength. The Pirates of Lys also introduces an agenda that further promotes themes of naval exploration and encourages radical new deck designs. Finally, the Greyjoys and Lannisters cook up new schemes while House Baratheon looks to hatch intrigues and win power with its burgeoning fleet of Smugglers.

An A Game of Thrones: The Card Game core set is required to play. Contains cards 41-60 of the A Song of the Sea cycle.