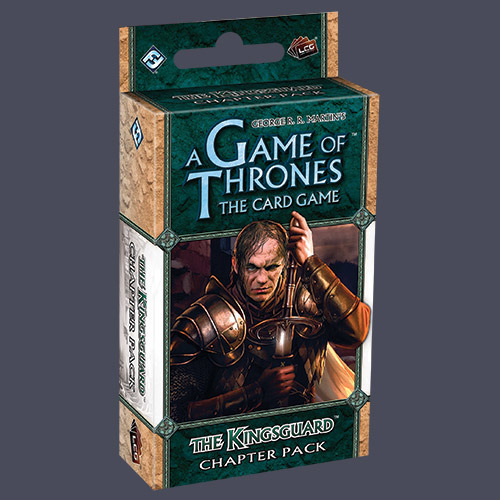 A Game of Thrones: The Kingsguard Chapter Pack

“Bran was going to be a knight himself someday, one of the Kingsguard. Old Nan said they were the finest swords in all the realm. There were only seven of them, and they wore white armor and had no wives or children, but lived only to serve the king.”

A man’s word can be broken. A knight’s honor can be tarnished. Any man can harbor secret ambitions, even a member of the Kingsguard. The Kingsguard is the third Chapter Pack in the Kingsroad cycle for A Game of Thrones: The Card Game.

The seven Sworn Brothers of the Kingsguard wear white armor and take vows to serve the crown, and only the crown. However, each Sworn Brother is a man at his core, and susceptible to the temptations and ambitions and doubts that plague all men. Each has his secrets, and the sixty new cards (three copies each of twenty different cards) in The Kingsguard lend shape to their ambitions, their deceptions, and their deadly talents.

As a part of the Kingsroad cycle, which focuses on a return to Westeros and the game's classic mechanics, The Kingsguard not only adds new depth to the members of the Kingsguard but to the game’s Shadows mechanic. In total, no fewer than twelve of the Chapter Pack’s twenty different cards feature the Shadows crest.

An A Game of Thrones: The Card Game core set is required to play. Contains cards 41-60 of the Kingsroad series.