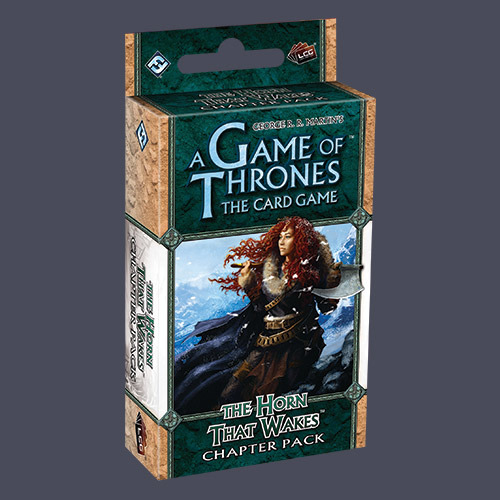 A Game of Thrones: The Horn That Wakes Chapter Pack

“I am the fire that burns against the cold, the light that brings the dawn, the horn that wakes the sleepers, the shield that guards the realms of men.”

In the north, winter is coming. The dead walk, and the fate of all the Seven Kingdoms, perhaps the fate of the whole world, depends upon the vigilance and valor of a few sworn brothers of the Night’s Watch.

The Horn That Wakes is the fourth Chapter Pack in the Kingsroad cycle for A Game of Thrones: The Card Game. Its sixty new cards (three copies each of twenty different cards) revisit the Night’s Watch, the Wildlings, and the intrigues and threats of the North. Eleven of the pack’s twenty new cards (three copies of each) support the Night’s Watch and Wildling themes, as well as a host of other dynamics build around The North agendas. You’ll find new copies of such notable characters as Jon Snow, Janos Slynt, and Coldhands, as well as the LCG’s first version of Ygritte. Additionally, twelve new characters, three new events, and two new plots ensure that each House finds plenty of reason to rejoice, even those furthest removed from the Wall.

An A Game of Thrones: The Card Game core set is required to play. Contains cards 61-80 of the Kingsroad series.