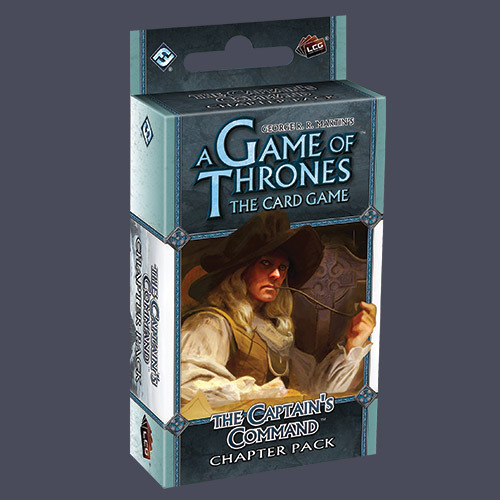 A Game of Thrones: The Captain's Command Chapter Pack

“Might we discuss the fleet?” asked Aurane Waters. “Fewer than a dozen of our ships survived the inferno on the Blackwater. We must needs restore our strength at sea.”

The Captain’s Command is the fifth Chapter Pack in the A Song of the Sea cycle for A Game of Thrones: The Card Game! Ships and sailors steer the course of history. While a fleet of Greyjoy Warships sails to Essos in search of a bold new alliance, the Kraken’s Raiders harass lesser fleets along the coasts of the Seven Kingdoms. Wyman Manderly schemes in White Harbor, dreaming how best to use his naval might to claim vengeance for the loss of his son. Stannis Baratheon barely sustains his claim to the Iron Throne by working with talented Smugglers. In King’s Landing, a new Master of Ships begins the construction of a fleet of ships to replace those lost in the Battle of Blackwater Bay.

The sixty cards (three copies each of twenty individual cards) from The Captain’s Command allow players to make greater use of the naval () enhancement. You’ll also find new locations, potent Prayers, and powerful blood magic. Even as the Great Houses ready their navies for war, The Captain’s Command simultaneously transports us across the Narrow Sea to Essos, bringing to life some characters and events inspired by the fourth and fifth books in George R.R. Martin’s beloved fantasy series, A Song of Ice and Fire.

An A Game of Thrones: The Card Game core set is required to play. Contains cards 81-100 of the A Song of the Sea cycle.