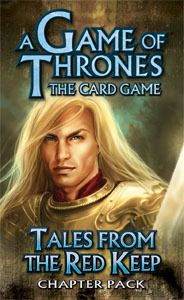 A Game of Thrones: Tales from the Red Keep Chapter Pack

In her dreams it had been immense, an endless stone maze with walls that seemed to shift and change behind her. She would find herself wandering down gloomy halls past faded tapestries... In some of the rooms the red stone walls would seem to drip blood...

Tales from the Red Keep is the fourth monthly installment of 60 fixed cards for the King's Landing expansion to the A Game of Thrones card game, based on George R.R. Martin's best-selling A Song of Ice and Fire saga. It contains 20 different never-before-seen cards designed to augment existing decks and add variety to the A Games of Thrones metagame.

An A Game of Thrones: The Card Game core set is required to play. Contains cards 61-80 of the King's Landing cycle.