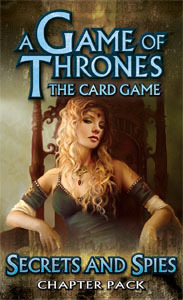 A Game of Thrones: Secrets and Spies Chapter Pack

In theory, the small council of King's Landing is one of the throne's most potent political assets, a collection of experienced advisors devoted to the good of the realm. In practice, the council is rife with deceit, corruption, treachery, intrigues, and betrayal.

Secrets and Spies is the fifth monthly installment of 60 fixed cards for the King's Landing expansion to the A Game of Thrones card game, based on George R.R. Martin's best-selling A Song of Ice and Fire saga. It contains 20 different never-before-seen cards designed to augment existing decks and add variety to the A Games of Thrones metagame.

An A Game of Thrones: The Card Game core set is required to play. Contains cards 81-100 of the King's Landing cycle.