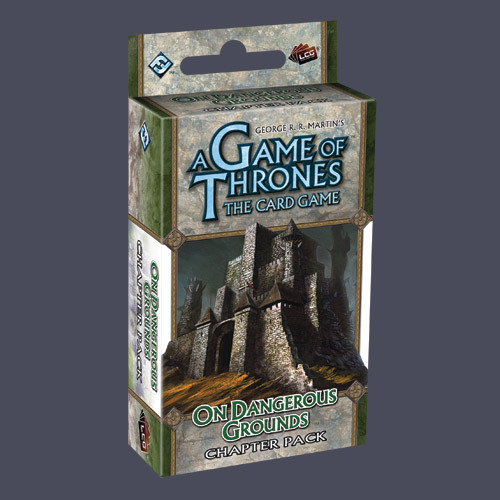 A Game of Thrones: On Dangerous Grounds Chapter Pack

"I have seen a hundred tournaments and more wars than I would wish, and however strong or fast or skilled a knight may be, there are others who can match him. A man will win one tourney, and fall quickly in the next. A slick spot in the grass may mean defeat, or what you ate for supper the night before. A change in the wind may bring the gift of victory."

On Dangerous Grounds is the third monthly installment of 60 fixed cards–3 copies each of 20 different cards–for the A Tale of Champions expansion to A Game of Thrones: The Card Game. Use the cards in this Chapter Pack allow players to augment existing decks or center entirely new decks as you respond to challenges in exciting new ways.

On Dangerous Grounds expands and develops the focus on Melee running throughout the A Tale of Champions cycle as new cards encourage players to forge and break alliances. Ladies attend the tourney grounds, and as the contestants struggle for supremacy, many of the cards from On Dangerous Grounds reward players who win early challenges. On Dangerous Grounds has plenty to interest A Game of Thrones players, both new and veteran.

An A Game of Thrones: The Card Game core set is required to play. Contains cards 41-60 of the A Tale of Champions cycle.