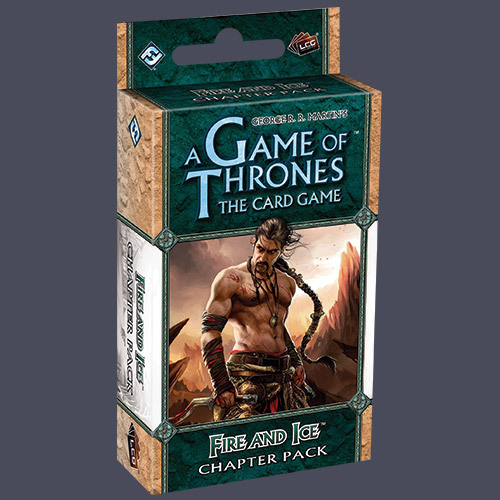 A Game of Thrones: Fire and Ice Chapter Pack

“In ancient books of Asshai it is written that there will come a day after a long summer when the stars bleed and the cold breath of darkness falls heavy on the world. In this dread hour a warrior shall draw from the fire a burning sword.”

–Melisandre, A Clash of Kings

The second Chapter Pack in the Kingsroad cycle, Fire and Ice returns players to the Seven Kingdoms of Westeros, their conflicts, and their intrigues. It also marks a return to some of the prominent themes and mechanics that have already been developed in A Game of Thrones: The Card Game.

Seasons in Westeros can last for years, Thus, it’s only natural that they can drastically reshape the lives of those they impact, and the sixty new cards in Fire and Ice (three copies each of twenty different cards) draw new focus to the game's Summer and Winter mechanics. They also add a number of intriguing new twists. Not only will you find new characters and locations to grant your deck and House a powerful boost in one season or the other, you’ll find two new Seasons agendas that will lead to all-new deck types. These agendas reward decks that combine many season-based effects, and they gain support from other cards in Fire and Ice that help players pull those season-based effects to the forefront, ensuring that the clash between Summer and Winter remains as vital within the game as it is within the Seven Kingdoms.

An A Game of Thrones: The Card Game core set is required to play. Contains cards 21-40 of the Kingsroad series.