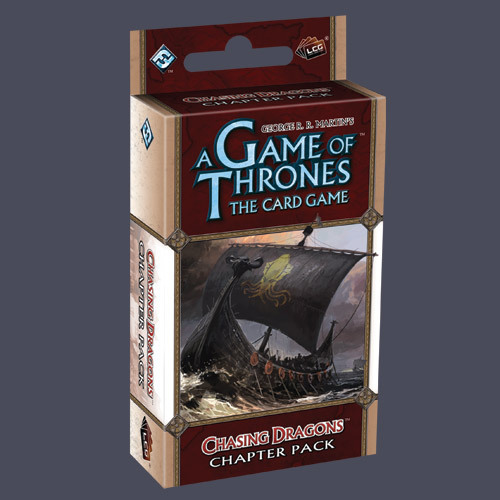 The square brick towers of Pentos were black silhouettes outlined against the setting sun. Dany could hear the singing of the red priests as they lit their night fires and the shouts of ragged children playing games beyond the walls of the estate.

The great Houses of Westeros bring their intrigues and power struggles to Essos in full force with the 60 new cards (3 copies each of 20 different cards) in Chasing Dragons. Armies gather in preparation for war, and the Houses call upon allies to exert their influence throughout the Free Cities.

Chasing Dragons introduces many notable figures, including new Lords and Knights to advance their Houses' interests, Raiders to cruise the coasts and storm the shores, and new Armies to mass outside the Eastern continent's great city-states. Even the cities are represented with a new Kingdom location and two City plots that grant additional strength and flexibility to City plot decks.

An A Game of Thrones: The Card Game core set is required to play. Contains cards 41-60 of the Beyong the Narrow Sea cycle.