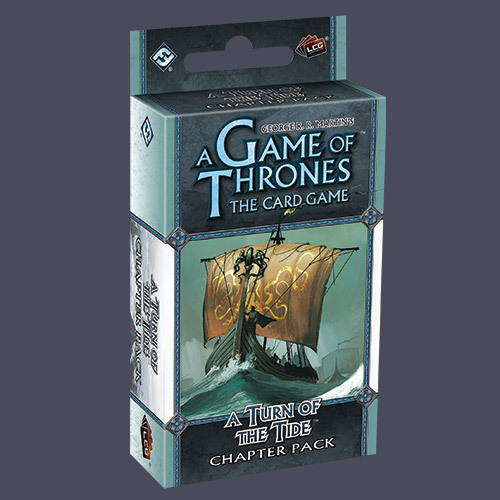 A Game of Thrones: A Turn of the Tide Chapter Pack

Black Betha rode the flood tide, her sail cracking and snapping at each shift of wind. Wraith and Lady Marya sailed beside her, no more than twenty yards between their hulls. His sons could keep a line. Davos took pride in that.

A Turn of the Tide is the fourth Chapter Pack in the A Song of the Sea cycle. As each of the Great Houses maneuvers its navy for utmost impact, their rivals respond. As the Lannisters use any means necessary to retain their hold on the Iron Throne, the Krakens of Greyjoy raid the coasts, the Martells hunt for new strategies to claim their vengeance, and House Baratheon seeks new life after their losses on the Blackwater. Meanwhile, the Starks turn their attentions toward The Wall and the threat from the north as the Dothraki follow their Targaryen queen to conquest in the lands across the Narrow Sea.

New Armies are deployed to seize strategic locations and strengthen their bids for the Iron Throne. These Armies gain powerful and thematic “Response” abilities while their owners run only character agendas or no agendas. The sixty cards from A Turn of the Tide (three copies each of twenty individual cards) also include several valuable locations and three dual-House cards.

An A Game of Thrones: The Card Game core set is required to play. Contains cards 61-80 of the A Song of the Sea cycle.