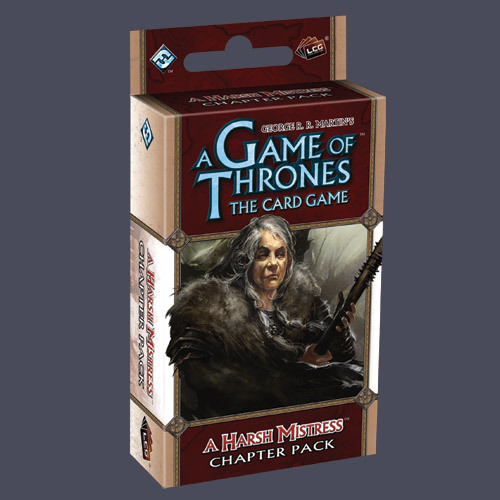 A Game of Thrones: A Harsh Mistress Chapter Pack

“You don't know what you're asking, Jon. The Night’s Watch is a sworn brotherhood. We have no families. None of us will ever father sons. Our wife is duty. Our mistress is honor.”

–Benjen Stark, A Game of Thrones

In George R.R. Martin’s A Song of Ice and Fire, the knights and lords who strive to live honorably often find themselves conflicted. The honorable path is seldom the easiest and often forces its advocates into difficult decisions. Many times, conflicted lords have turned from the safer and more practical course of action and thrown themselves knowingly into harm’s way in order to fulfill a debt of honor.

The 60 new cards (3 copies each of 20 different cards) in A Harsh Mistress allow players to relay commands to their characters and to impose harsh duties upon their opponents. Unique locations, characters, and powerful attachments fill this Chapter Pack, along with two new plots that continue to the develop the game’s focus on its unique personalities. From the wintry north to the Free Cities of Essos, duty demands harsh sacrifices of those men and women who live in service to the Great Houses of Westeros.

An A Game of Thrones: The Card Game core set is required to play. Contains cards 61-80 of the Beyong the Narrow Sea cycle.