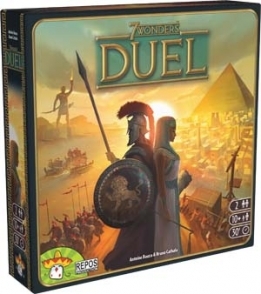 Experience an intense two-player struggle for supremacy in the ancient world!

Designed by Antoine Bauza and Bruno Cathala, 7 Wonders: Duel adapts the game play and excitement of 7 Wonders for one-on- one battles. Choose the Wonders you aim to build and guide your city through three Ages of drafting cards from cunningly shaped tableaus. Victory can be achieved in three ways: by invading your opponent’s capital, by achieving a monopoly on scientific advancement, or simply by crafting the city that will earn the most victory points in the end. But be warned: only seven of the eight Wonders in play can be built.

Will your city achieve greatness, or will your opponent prevent you from completing all your Wonders?