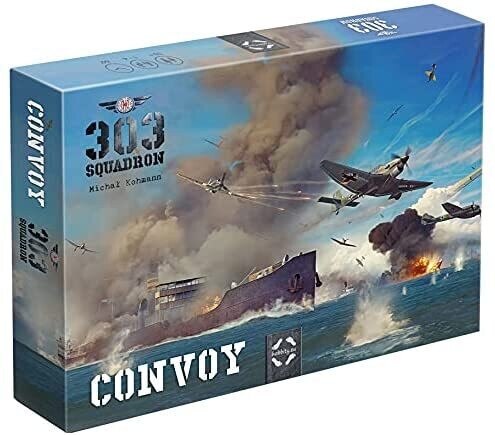 Increase your game with more enemies, bombing ability, and a naval scenario!

Convoy is an expansion for 303 Squadron the board game. This expansion will take you over the seas surrounding and protecting Britain which, together with the air and the homeland, was an important setting for the Battle of Britain.

Germany’s plan was to cut off Britain from supplies: German airplanes were attacking the ships in the Channel, while the U-boats were trying to intercept and sink them. Your task, as 303 Squadron pilots, is to protect your convoys against bombing from Bf.110s and the assault of the deadly U-boat. But you will have limited time to reach the convoy and force the enemy to withdraw, so force your engines and adjust your aim, you have to strike first and strong!

But new additions don’t stop here, because more enemies are also included in this set. In this expansion, you find extra Bf.109s and the dangerous Aces of the Luftwaffe. Try to face them flying the Spitfires during the campaign, taking part in this “special event”.

In the expansion, you will find extra Bf.110s with the new “Bombing” ability; a deadly U-boat, threatening your convoys; and models of the transport ships you will need to protect.