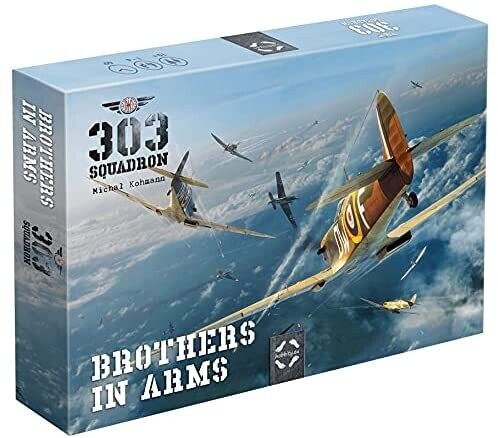 Spitfire fighters and the Aces of the Luftwaffe enter the game!

Brothers in Arms is an expansion for 303 Squadron the board game. The Hurricane-equipped 303 Squadron is not alone in the skies over Britain to fight against the Luftwaffe squadrons. A neighboring squadron of British fighters, the famous Spitfires, is also dueling against the German Messerschmitts. They fight bravely, but their planes are badly damaged and ammunition is running out. They need your help to survive. Fighting side by side, victory will be yours.

This expansion includes 8 different airplanes, new cards, a scenario, and rules for expanded play. It also includes additional rules that allow the 303 pilots to "upgrade" their airplanes, mounting in Spitfires. Historically this “upgrade” happened after the Battle of Britain, but it’s a sort of plausible "what-ifs" to explore, isn’t it?

But new additions don’t stop here, because more enemies are also included in this set. In this expansion, you find extra Bf.109s and the dangerous Aces of the Luftwaffe. Try to face them flying the Spitfires!