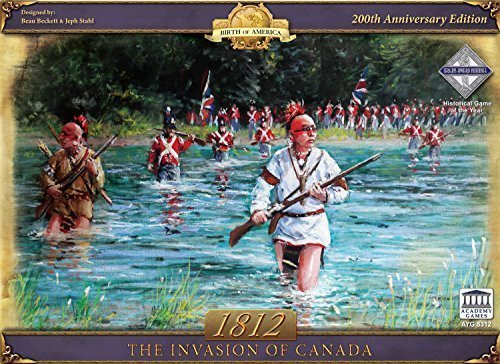 1812: The Invasion of Canada (DING/DENT-Very Light)

The year is 1812. Great Britain and her allies are battling Napoleon for control of Europe. In response to British seizure of American ships and goods, the young United States declares war on Britain and invades Canada. You and up to 4 other players take command of the armies of the British Redcoats, Canadian Militia, and Native Americans, or of the American Regulars and American Militia to decide the fate of the Americas. The action takes place on a huge historically accurate map that spans the United States and Canada from Detroit to Montreal. Players from each faction cooperate to gain control of key towns and forts.

1812 features fast, intuitive and fun gameplay that involves teamwork and strategic planning in a historic and educational setting. This is THE GAME for people who want an enjoyable and manageable introduction to historic/conflict based games.

In 1812 - The Invasion of Canada, players take on one of the roles of the major factions that took part in the War of 1812. On the British side these are represented by the British Regulars (Redcoats), Canadian Militia and Native Americans; and the American Regular Army and American Militia comprise the American players. Players for each side will cooperate with each other in order to plan and conduct their campaigns. Each side will attempt to capture Objective Areas on the map. When a truce is called, the side that controls the most enemy Objective Areas wins.

The map for 1812 encompasses portions of Michigan, Ohio, Pennsylvania, and New York in the United States and Ontario and Quebec in Canada. Each region is divided into British (red) and American (blue) Homeland Areas, some with starred Objectives. The side with the higher number of objectives held wins the game!

1812 is divided into a number of rounds depending on the scenario being played. Those rounds are further subdivided into turns for each faction in the game. Turn order within each round is determined by random draw. It is possible to go last one round and then go first in the next!

Each faction has its own deck of card to play with. Decks are divided into three types of cards, Movement cards, Event cards, and a Truce card. Movement cards govern army group movements in the game. Event cards are special cards which may be played at designated times during the turn which add to the strategy of the game in unique ways. Truce cards are a special type of Movement card. Once all factions of one or both sides have played their Truce cards, the game will end that round!

By moving forces into an area occupied by the opposition, a battle is initiated! An army group can be moved from one area to another by any faction player with at least one unit in the group. Because movement cards are limited, success must be achieved through cooperation with faction teammates on your side.

Each faction has their own dice set representing the strengths and weaknesses of the faction. Regulars on both sides have a higher chance to hit, and are less likely to flee, but only roll two dice per battle. Militia are more likely to flee, but roll three dice per battle. Units that have fled the battle will regroup during the replacements phase, which can be an important strategy!

The goal of the game is to control enemy objectives. Control flags are used to mark current ownership of each enemy area. After End Game conditions have triggered, the faction which has the most Control Flags is the winner. It is possible to end the game in a tie!